Oozing audacity and wit, Arshak Sarkissian’s genre-twisting, dazzlingly imaginative paintings and sculptures leave the spectator with an exhilarating sense of liberation. With a flair for juxtaposing the animal, human, and plant worlds in dramatic yet tongue-in-cheek compositions, Sarkissian is a master of telling grown-up tales while also ruffling some serious feathers. No wonder he is celebrated as the visual poet of Yerevan’s youth culture, an innovator whose works have found resonance with the city’s dynamic spirit.

Born in Gyumri in 1981 and educated in Yerevan and Cyprus, Sarkissian has garnered international recognition. His canvases and sculptures have been exhibited across the globe, and many are now part of significant private and public collections. Named an Honorary Artist of the Republic of Armenia, he was commissioned to redesign the passenger terminals of Yerevan’s Zvartnots International Airport, and entrusted with the design of a joint Armenian-Bulgarian stamp. 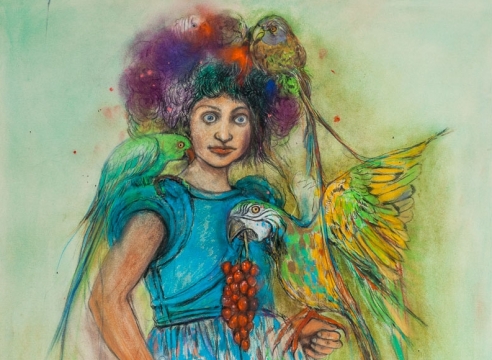