Diana Hakobyan was born in 1974, in Yerevan, Armenia. From 1989 until 1993, she attended the College of Fine Arts in Yerevan. In 1996, she graduated from Yerevan’s Academy of Fine Arts, focusing on visual arts.

Her major solo exhibition, The Presence of the Other, was displayed at the Armenian Center for Contemporary Experimental Art in Yerevan. The exhibition represented the struggles of the “others,” people who felt as though they were on the outside, specifically women. Her work attempted to unify all people present.

Hakobyan works with canvas and readymade sculpture. Her paintings are dynamic, full of motion and energy. As a video artist, she translates the same motion onto the canvas. She holds a unique talent to capture the energetic and vibrant movements in a still image.

Her artwork has been shown internationally in France, Bulgaria, Austria, Italy, Russia, Greece, Iran, Syria, and Germany. She has been presented the Golden Apricot Award from the International Film Festival in Armenia and the Youth Award for the Best Video Art from the ACCEA. 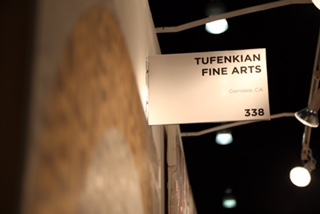